This article was sometime in the making. Following a post, I made refuting the Christian cult “the Black Hebrew Israelites” (BHI). Months later, I had gotten into a discussion on my sister’s Facebook with one of these trolls and so I posted my original article causing one of them by the name of “Sean” to attempt a response. (Which can be viewed here try to ignore his not being able to spell the word “kingdom”)

However, in an event that must be embarrassing, all Sean did was plagiarize the following article here

So while this is formally a refutation to Sean, in reality, I just have to go through the sheer absurdity of his copy and pasted article.

Now he begins his argument saying the Portuguese called the town of Xweda “Ajudá (A-Juda)”. Not only is this irrelevant but it also does nothing to counter it being a loan word as noted in my first article. Hilariously he states:

“There are too many different old maps that I have found with Judah being the name of this town to brush it off as some mistake.”

The first point is that there are not many “different old maps” its ONE map by the name of “A New & Accurate Of Negroland And The Adjacent Countries, Also Upper Guinea… by Emanuel Bowen” [1] Here it is in full: 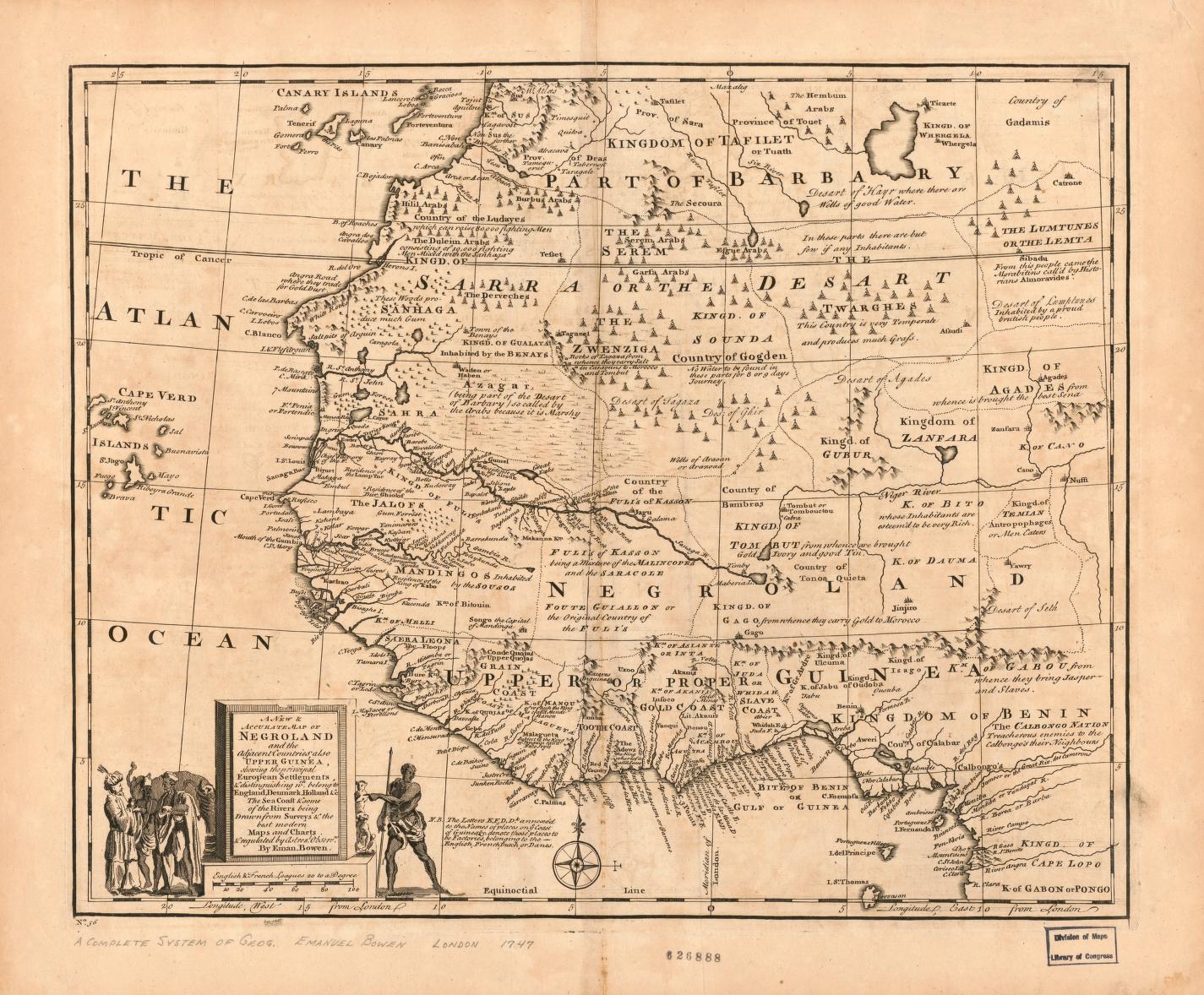 Next, I never once said the name is a “mistake”. I said Black Hebrew Israelites (BHI) not understanding the simple phenomena called “loan words” in language is a mistake. Continuing on Sean says the following:

“Ouidah is best known for its central role in the slave trade during the 17th, 18th and 19th centuries, during which time nearly 1,000,000 individuals were boarded onto ships from the beach at Ouidah and were transported across the Atlantic. The Portuguese, English, Dutch, and French all constructed forts in the city to protect their interests in SLAVING.”

Besides most of his article just repeating what I said, he forgets the ever so important point that Ouidah (real name Xweda) was a kingdom working WITH the slavers to sell black people’s ancestors. Again, in ignorance he is basically arguing, the Africans (aka “Hamites” in their lingo) whose kingdom is called “Xweda” that the French took into their language and pronounced like “Shoodah” is the homeland of the Jews. Basic common sense, this is irrational as the people who named it are not the “Israelites” so what the French call their allies’ kingdom doesn’t prove anything for BHI. Again I’ll use small words here so he can understand:

As I said in the first post, one can’t help but laugh at the irony of racist black supremacists turning these slavers into heroes. Anyways, he then proceeds with his “preaching” to try and add fluff (and propaganda) to his poor refutation. One of the howlers in this article is the following (unsourced) claim:

“In Ghana, the Hebrews were identified as the Ashantee

In Mali, the indigenous people were identified as the Mandinka, however, they were not Hebrews

In Songhay, the city of Timbuktu, which was a great center of education and commerce and many of the indigenous people were Hebrews. Guinea, which was Known as the Gold Coast, also had a significant numbers of Hebrews.”

Now that everyone’s picked their sides off the floor, the reality is while there were some Jews in west Africa these tribes have nothing to do with being Jewish. These tribes are far from being mythological and their histories can easily be looked up (which I recommend for everyone) but I’ll give a very brief synopsis here:

To begin, the Ashantee is a subgroup (albeit the largest) of the people known as the Akan out of modern-day Ghana. While I, the author, wasn’t able to find any reliable source on the tribe’s founder’s religion, through cross-referencing with the entirety of the Akan one is able reasonably to hypothesize it was probably one of the traditional religions of the Ashantee people (which while not impossible, would be weird that the tribe was one religion and he was the oddball out).

The creator God in the Ashantee pantheon is known by many names with the most common one being Nyame (meaning “He who knows and sees everything”) He also carries other titles like Anase Kokuroku (“the great spider” or “great designer”), Oboadee (“creator”), or Odomankoma (“infinite inventor”). [2] Now keep in mind the entirety of the Akan hold to these beliefs, not just the Ashantee as claimed. Now one may go well what can go wrong these are clear descriptions from the Bible meaning their “Hebrews” right? Well no, Nyame has an entire family that is worshipped such as Asase Ya (his wife), Bia, (the oldest and favorite son), Tano (the younger son) and (depending on who you ask but usually not worshipped) the third son who will probably be the most familiar to western readers, Anansi the Spider. [3] So unless Sean wants to claim it’s permissible to worship multiple gods in Judaism the traditional religion of the Ashanti is not “Hebrews”. So again we have another moment from the BHI butchering African history (while claiming to bring black people back to their “roots”) and just making things up (though the author will concede there is a slight possibility the Ashantee may have been influenced by later interactions with Christians).

Now the reason Sean didn’t try and say the Mandinka were Jews (but will still be intellectually dishonest as will see in a second) is that the Mali Empire is probably the most prestigious Muslim dynasty in Sub Sahara Africa, with its most famous ruler being Mansa Musa (aka the richest person in recorded history). Where the dishonesty comes in, is regarding the Songhai Empire and Timbuktu. To begin Timbuktu became the “great center of education and commerce” because of the Muslims of the Mali Empire (and  the again Muslim Songhai Empire that later conquered it and absorbed it into their empire) [4] One odd thing I find about Black supremacy groups such as this is they want to take credit for all the things that African Muslims did but never want to speak on how Islam was a major religion in the region and instead try to make it seem like “conquering Arabs” came in and forced it on everybody (despite most of Islam spreading in the Sub Sahara via the elites through trade) [5]

With that out of the way, I would now like to take a moment to again emphasize (because for some odd reason BHI have difficulty in grasping this point) I am not claiming there was no Jewish community whatsoever in Sub Saharan Africa. I am arguing to say ALL people of African descent in the US are Jews is factually wrong and even for the very slight chance of a small minority being so (again the number of slaves that came to the United States was approx 200,000 to 400,000 of the entire 12 million), they would be no different from Jews that hail from Germany, Spain, Yemen etc. who BHI claim are “fakes”. The BHI is making all these empires and tribes seem like they were Jewish who were then enslaved by Europeans for being Jewish and this deception is born from taking advantage of African Americans’ general ignorance of African and Trans-Atlantic slave trade history. While it is true there is the attestation of Jews coming from Yemen they were always a minority in the population (like all other Jewish communities in the Diaspora period) So pulling up random letters showing Jewish communities in Africa is a red herring to my actual argument which is for BHI to prove ALL black people in America are Jews and not a small,  improvable, minority within a minority.

While he continues his borderline ramble of propaganda he (again) make another (unsourced) claim (I think we’re beginning to see a pattern here):

“…if you look at the original names of those African slaves that were captured before Europeans changed their names after getting to the Americas.., many of them had Hebrew names.

Searching slavevoyages.org (a database of those that boarded slave ships during the trans-atlantic slave trade) just for names with “yah” (a short for the name of God, example: hallelujah, kumbaya..etc) in them returned over 800 matches, the term “jah” had over 400. …”

Now Sean draws from the following website Slavevoyages.org and parades “Yah” as an achievement of every Black person in America’s alleged Jewish roots. To begin he (or rather the man he plagiarized) should have done more research on what they were quoting as this refutes BHI claims. For one just because a name has “yah” in it does not make it Hebrew. An example of this using the exact same site results presented, the names “Ayah”, “Bayah”, “Yahya” “Cunyah” and “Diyah” (also keep in mind I’m not even counting their spelling alternatives or cultural name changes like for example in Turkish “Mehmet” is “Muhammad”) appears quite frequently (as in multiple times every page). Now Muslims will immediately recognize these as they’re ALL Arabic words/names (funny enough also proving my point in part 1 that many slaves cames from Muslim areas or areas influenced by Islam) so the alleged “800 matches” is extremely padded and this is not even including other common names on the list whose etymology I would have to research.

Next, if they took the time to look at the site and their methods they would have known that they took samples from Havana, Cuba, and Freetown, Sierra Leone trying to match linguistic origins. So barring some minority exceptions due to immigration later on, almost none of these people would be descendants of African Americans in the United States. Finally, this site is actually a byproduct of an even larger database called the “African Origins Project”. When one cross refrences to this site even more Muslim names appear with the letters “yah”. So again this whole thing is derived from making an assumption of names containing the letters “y, a, and h” in a search bar.

Alright so now with a refutation I will now emphasize my original points for Sean to prove (hopefully with some original work this time):

[3] Who’s who in Non-classical Mythology By Egerton Sykes, Alan Kendall under the ”Nyame” entry

6 thoughts on “The Kingdom of Juda (Whydah): Refuting Sean’s ignorance”

The Case for Polygyny

Video: Christian apologist admits the Bible is not monotheistic!

YouTube SHORT: Christians are wrong about the “angel of the Lord”!