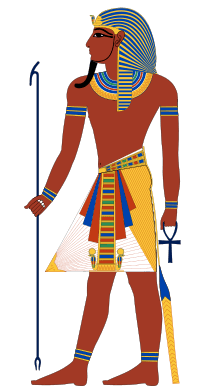 The “Pharaoh” in Genesis: How the Quran and Ahadith Correct the Bible

“And when Pharaoh’s officials saw her, they praised her to Pharaoh, and she was taken into his palace.”

It is well-known that the Biblical use of the word “pharaoh” as a title for the king of Egypt is anachronistic when used in the Genesis story of the prophet Joseph (peace be upon him), an error that the Quran did not repeat, which refutes the common polemic that the author of the Quran “copied” from the Bible.[1] The term “pharaoh” is used throughout the Bible, and especially in Genesis and Exodus, to refer to the king of Egypt. However, the Egyptians themselves did not use such a term to refer to their kings until at least the reign of Tuthmose III, who reigned from 1504-1450 BCE.[2] Gabriel Reynolds pushes the date even later, to 1200 BCE.[3] Yet according to the book of Genesis, this word was used even as early as the time of Abraham (peace be upon him)! In this short article, we will see that when it comes to the Bible’s anachronistic usage of “pharaoh”, which is undeniable, even the ahadith do not repeat the mistake. This failure to repeat what should have been a minor detail and easily overlooked serves as a powerful refutation of the oft-repeated claim that the Prophet Muhammad (peace be upon him) simply copied the stories of the Bible.

The “Pharaoh” in Genesis

The word “pharaoh” first appears in the Bible in Genesis 12:15, which describes how the Egyptians “praised” the beauty of Sarah, Abraham’s wife, to the “Pharaoh”:

“And when Pharaoh’s officials saw her, they praised her to Pharaoh, and she was taken into his palace.”[4]

The term is then used four more times in the chapter.

The next time it is used is in Genesis 37, where the story of Joseph (peace be upon him) begins. According to John Bright, the events related from Genesis 12 to Genesis 50 can “fit best” in the period between “the twentieth and seventeenth centuries” BCE, though he admitted the uncertainty in mentioning any firm dates.[5] Nevertheless, it is doubtful that Abraham (peace be upon him) would have lived in the time of Tuthmose III when the term “pharaoh” first began to be used to refer to the king of Egypt. Interestingly, Bright cited the 17th-century CE scholar James Ussher as placing Abraham’s birth around the year 1996 BCE and the “descent of Joseph into Egypt in 1728 [BCE]”, though again he cautioned that “it is not so simple as that”.[6]

While there can be no certainty about the exact period, it can be stated confidently that Abraham (peace be upon him) could not have lived in the 1400s BCE. Similarly, Joseph’s presence in Egypt is unlikely to have occurred during that period either. The renowned historian Kenneth Kitchen places the “setting of Joseph” in the “late Middle Kingdom to Second Intermediate Period”.[7] This would mean anywhere from the 1600s BCE to the 1500s BCE,[8] and happens to coincide with the period of Hyksos rule in Egypt.[9] Since the reign of Tuthmose III began near the end of the 16th century (1504 BCE), it is unlikely that he was the pharaoh mentioned in Genesis 37. Hence, by placing a “pharaoh” in the stories of both Abraham and Joseph (peace be upon them), the Bible clearly makes an anachronistic error. This error, which would most likely have gone unnoticed for centuries, should then have appeared in the Quranic narratives and the ahadith literature, assuming that the Quran “copied” from the Bible, as some Christians claim. And yet astonishingly, we find this is not the case!

The “Pharaoh” King of Egypt in the Quran and Ahadith

It has already been documented elsewhere that the Quran does not repeat the mistake of the Bible in using the term “pharaoh” in the story of Joseph.[10] In the entire surah named after the great prophet (Surah 12), the Arabic word “fir’awn” (pharaoh) never appears. Instead, the word used for the Egyptian monarch is simply “the king” (al-maliku).[11] Thus, if the Quranic narrative had been copied from Jewish and Christian sources, including the Bible, it somehow avoided repeating the Biblical error, even though there seems to be no reason why that would be the case.[12]

As for the story of Abraham (peace be upon him), the Quran does not mention his sojourn to Egypt, so there is no mention of any Egyptian king. However, there are ahadith from Sahih Bukhari and Sahih Muslim which do allude to the journey to Egypt. In Sahih Bukhari, a story like the one told in Genesis 12 is related, though it does not specifically mention Egypt (see below for more on this).[13] However, once again, the term “pharaoh” is curiously absent from the hadith, whereas Genesis 12 uses it 5 times! Instead, like the Quran, the hadith simply refers to the ruler as “a king or a tyrant”. A similar narration in Sahih Muslim also does not use the term “pharaoh”.[14] But this hadith from Sahih Muslim mentions that the “king” gave Hajar (may Allah be pleased with her) to Sarah (may Allah be pleased with her) as a “gift”.[15] Hajar/Hagar was, of course, the mother of Ishmael (peace be upon him). That she was an Egyptian is alluded to in another hadith in Sahih Muslim:

“Abu Dharr reported Allah’s Messenger (ﷺ) as saying: You would soon conquer Egypt and that is a land which is known (as the land of al-qirat). So, when you conquer it, treat its inhabitants well. For there lies upon you the responsibility because of blood-tie or relationship of marriage (with them).”[16]

According to Ibn Shihab Al-Zuhri, the reference to the “blood-tie” was to Hajar.[17] Thus, it seems that the “king” mentioned in the ahadith was the ruler of Egypt and that Hajar was an Egyptian. So, unlike the Bible, which incorrectly refers to the king as the “pharaoh”, the authentic ahadith do not make this error. In short, both the Quran and the authentic ahadith correct the Bible for its anachronism.

Recently, Gabriel Reynolds has suggested that the Quranic understanding of the term “pharaoh” (fir’awn) is as a name, rather than as the title of the king of Egypt,[18] which is clearly an attempt to explain the Quran’s apparent supernatural knowledge by appealing to other explanations due to anti-supernatural bias.  This is a strange claim and can be easily refuted by demonstrating how the early Muslims understood the term. In a hadith from the Musnad Ahmad, we find the following narration (emphasis mine):

“It was narrated from Sa’eed bin al-Musayyab that ‘Umar bin al-Khattab said: A boy was born to the brother of Umm Salamah, the wife of the Prophet ﷺ and they called him al-Waleed. The Prophet ﷺ said: ‘You have called him by the name of your pharaoh, for there will be among this ummah a man who is called al-Waleed and he will be worse to them than Pharaoh was to his people.’”[19]

The Arabic word for “your pharaoh” is “فَرَاعِنَتِكُمْ”. Even though this hadith has been graded “weak” (daif) by the scholars of Islam,[20] it nevertheless shows that the early generations of Muslims understood that “pharaoh” was not a name but rather a title. In fact, the famous commentator al-Tabari explained in his commentary on Surah al-Baqarah, 2:49 that the term “Pharaoh” was applied to the kings of Egypt just like kings of the Romans were known as “Caesar”.[21] He also stated that the “name” of the infamous “Pharaoh” of the Exodus was “al-Walid bin Musab bin al-Rayyan”.[22] Whether this is an authentic narration or not is irrelevant and whether this was the name of the infamous pharaoh or not is irrelevant. Rather, what is relevant is that it demonstrates that the early Muslims never interpreted the word fir’awn as a “name”.

Given the evidence against the Bible’s anachronistic use of the term “pharaoh”, and the absence of the anachronism from the Quran and Ahadith, it would be silly to claim that the latter copied the Joseph story from the former. The absence of such a minor detail from the authentic Islamic sources serves as a powerful refutation of a common Christian polemic against Islam. Moreover, the presence of anachronisms serves as indisputable evidence against the Bible’s sacred status as “inspired” scripture. It most certainly is not “inspired”.

[2] Louay Fatoohi and Shetha Al-Dargazelli, The Mystery of Israel in Ancient Egypt: The Exodus in the Qur’an, the Old Testament, Archaeological Finds, and Historical Sources (Birmingham: Luna Plena Publishing, 2008), p. 41.

Other scholars believe that Amenhophis IV (c. 1352–1338 BCE) was the first king to be referred to as “pharaoh” (https://www.islamic-awareness.org/quran/contrad/external/josephdetail).

[4] Ironically, the term “pharaoh” would have been used to refer to the palace of the king of Egypt, which is where Sarah was taken!

The Hyksos were foreign invaders who occupied the seat of power in Egypt during the Second Intermediate Period. The end of this period has been approximated to have occurred around 1550 BCE (https://www.cemml.colostate.edu/cultural/09476/egypt02-04enl.html). The Islamic-Awareness article above gives a date of 1553 BCE.

[12] A 7th-century Arab merchant with no knowledge of Egyptian history could certainly have been forgiven for making such an error, as would Jewish and Christians sources, which made the error repeatedly. But since the Quran is claimed to have come from God, it is not surprising that such an error would not have been repeated.

Thanks goes to brother stewjo004 for pointing me to this hadith.

4 thoughts on “The “Pharaoh” in Genesis: How the Quran and Ahadith Correct the Bible (updated)”

The Crucifixion in the Bible and the Quran: A Critical Examination (updated)

The “Pharaoh” in Genesis: How the Quran and Ahadith Correct the Bible (updated)